Ladies and gentlemen, I give you Jack Stanley Hodgins III.

The man is a rock star. I don’t say that enough. I’m so often distracted by the things Booth does with his stupidly perfect face—I don’t always give Hodgins the credit he deserves for being this team’s backbone on a weekly basis. He’s King of the Lab. His passion, enthusiasm, and curly hair should not go overlooked any longer. Neither should his abs; I MEAN REALLY NOW.

Hodgins is this show in a nutshell. He’s everything Bones does right in the character department. Think about how remarkable it is that the bug guy has a significant role—most shows would just make him, you know, the awkward bug guy who rattles off scientific jargon and then disappears behind his test tubes. Hart Hanson didn’t play it like that. He made Hodgins a full member of the team, and then he made him awesome.

Hodgins drives fast cars and has a way with the ladies. He also likes racing beetles on a Friday night. He’s a conspiracy theorist with anger management issues, but experiments and fancy machines and tiny bugs make him giddy. He’s rich squared to the power of ten times four, but he doesn’t want to be anyone’s boss; he just wants to be Jack Hodgins who works in the lab.

Which just makes me want to work in the lab.

We’d be such good friends who maybe make out and get married.

I love how much Hodgins loves science. It’s one of the most important things about this show: everyone loves what they do. They take their jobs seriously, but there’s no shame in enjoying what you were built for, even if you’re built for solving murder. That’s why we have Hodgins: to remind us that it’s cool to get excited about polycyclic aromatic hydrocarbons. 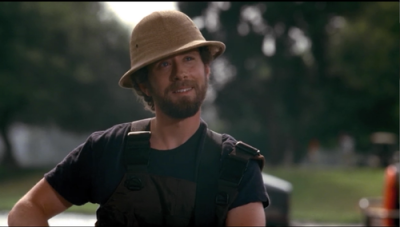 Also, can we talk about how good TJ Thyne is with the big confusing words—how he makes them sound like real, fascinating, breathing things instead of letters in dusty books? Must be his hot tea and honey voice. TJ Thyne doesn’t know the meaning of phoning it in. Remember when Hodgins cried about how much he loved Angela?

“Stupid in love with her.”

If you don’t want to walk through life with him, you’re lying to yourself. He seduced Angela with fish bacteria. He kissed her on a swing set. He left a Shakespearean rose on her desk and looked her in the eyes and walked away without saying anything, like a damn Brawny paper towel man.

Hodgins has Angela’s face tattooed on his sculpted bicep and even when they were broken up he LIKED IT.

He likes having people in his life. He takes a while to let you in, but once he does, he’ll spend an entire day figuring out the secret ingredient to your grandmother’s hot sauce, just to make you happy.

He might sometimes hate everyone “to varying degrees” and plan his coworkers’ murders in great detail, but that’s just a coping mechanism. Hodgins is also the most optimistic of all rubber band snappers. Remember when he found out that his baby had a 25% chance of blindness and decided to take up the piano, just in case?

And remember when he strangled Pelant without blinking? Because that happened too. Jack Hodgins is my new Jack Bristow. He thought he was so hardcore in the early seasons, but having a family, being happier—it’s made everything more real for him. He loves more people and will go to to greater lengths to protect them. Hodgins has probably changed more than any of the other characters, but his change has also been the most organic, because it’s still all about passion. In the beginning, he was excited about conspiracy theories and being malignant and blowing things up, and now he’s excited about Angela and his child and blowing things up.