Elsewhere in Pawnee, family man Ron is rebelling against his newfound lack of privacy. He enlists Donna and Tom to help him go off the grid, which is glorious, because Donna and Tom are the type of people who live tweet their #questforcoffee and then snapchat about it. Also glorious because when Donna and Tom are together, magic happens. They cut up his credit cards, trash his phone, and set off to remove Ron’s photo from the wall of every dining establishment in town (Ron: “Why is everyone else so bad at eating?”). Diane, warrior princess that she is, sets her husband straight on one thing. He can get off every grid except her own. Ron, meet the original phone, for family emergencies only. Original phone, meet Ron’s cell phone belt clip. Everyone, meet your Eagleton doppelgangers. 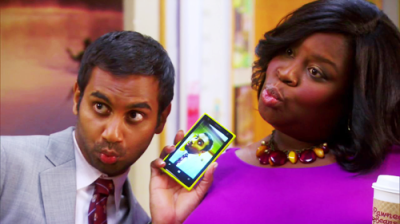 There can be no other Ron—he’s a better version of George Washington—so I’m glad his doppelganger self turns out to be his exact opposite. Donna, on the other hand, needs to keep Craig forever. He’s is one of my new favorite humans. I love him, and whatever happens to his job, I will always love him. He’s still not more enthusiastic than Leslie, though. Look at her tirelessly work to make the tough cuts in this merger. At least Tom is safe; his equivalent is a computer program named ERIC, which is disappointing. After the way Mike Schur built up this secret, I had my stunt-casting sights set pretty high. And Tom has no good reason to lie about ERIC to Leslie, except that he likes making himself feel like a dope negotiator without actually doing any work. Props to you, Tom.

As for April, she’s in rare form messing with Tynnyfer, who comes to us fully formed from the pages of Regina George’s burn book. April smoothly mimics Tynny’s whole personality, luring her into her confidence until she can convince her that she doesn’t actually want this job. She also may or may not send Tynny to Dwayne Wade’s house. It’s delightful. Just please don’t tell me she really gave up veterinary school for this. April loves animals. Her “gut feeling” against that school in Bloomington seems more like a fear of progress, and I’m hoping she won’t let that stop her.

“Food is for eating. Places are for being. End of discussion.”

“Sometimes I wish you went down on that Titanic with all of your sorority sisters.”

“I love you, but your solution to every problem is to live inside a mountain.”

“I hate the one-at-a-time system!”

Ron’s wearing the cap he got in Europe!

“Verbal things, from my mouth.”

Ann’s very clever, with her waffles and her shirtless Joe Biden on a horse.

“I WANT KENTUCKY BLUEGRASS, I WANT A TEN PERCENT DISCOUNT, AND I WANT YOU TO APOLOGIZE TO MY BEST FRIEND DONNA!”

“Is there some kind of medication that you need a lot of and have taken none of or maybe too much of today?”

“Oh I have a medical condition all right, and it’s called caring too much, AND IT’S INCURABLE! Also I have Eczema.”

“Do you think it would be weird if we held hands?”

“She’s the worst person I’ve ever met. I wanna travel the world with her.”

“You are excused, Fake Ann. That was six hours well spent. I thank you.”

Error: Twitter did not respond. Please wait a few minutes and refresh this page.