Posted by Sage of Head Over Feels

We GET it, Paul McGann.

You’re smooth and suave and enormously talented and infuriatingly nonchalant about all of it.

We’ve been double-teaming our Gallifrey One recaps with Kelly of The TV Mouse, our travel buddy and most direct “pay-it-forward” Whovian creation. She’ll readily agree that we destroyed her life with this fandom in general and David Tennant’s face, specifically. You can read part one of our adventures at the largest and longest running Doctor Who fan convention in the US here. Part two is here. If you read those already, you might have noticed that Kim and Kelly skimmed over all McGann (full name: Sexy Beast Paul McGann) specific happenings. Why? Because Paul deserves his own post. Always the lead, darling.

Also, if he ever finds this, I’m moving to Karn.

Here at HoF, for better or for worse, we fall hard and we fall fast. It was 6am and I was still bleary-eyed from sleep when the BBC posted a pre-50th Anniversary webisode that finally opened my eyes to everything the Eighth Doctor could be. (For more waxing poetic on “Night of the Doctor” and Paul’s performance in it, check out our picks for the Best Performances of 2013.) So we’d been giddy about being in his presence at Gally since the day he was announced. We weren’t the only ones. A couple hours into day 1, we’d already swapped for handfuls of Eight-specific ribbons, including “The front crashes first, think it through,” and the two-fer of, “This is a ribbon,” and “But probably not the one you were expecting.” But there were at least two people in LAX Marriott that weekend who hadn’t yet had the experience of watching that 6-minute shove straight into womanhood. One was our friend Gillian. The other was Paul McGann.

So: Saturday morning, right after we watched “Closing Time” with live director commentary and willed Eleven to really french It’s-Always-Been-You-Craig this time, Paul came out on stage and settled in for his spotlight panel. And when I say he “settled in,” I MEAN IT.

I’m not fully convinced that Paul McGann has bones (though he’s free to prove it to me, hey-oooo), because he practically liquified himself onto the Marriott’s blood orange couches at every opportunity. My camera’s got a fly zoom, as you can see, but by the end of each of his panels, he’d sunk below the heads of people in front of us. This poor man’s bald spot was not supposed to be the focus of this photo, FYI.

To prove my point that Paul is half Irish/half the silver goo from Alex Mack, see this highly sophisticated time lapse photo series. 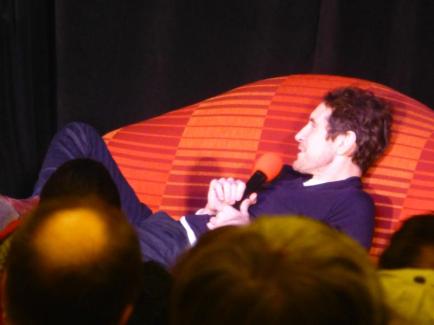 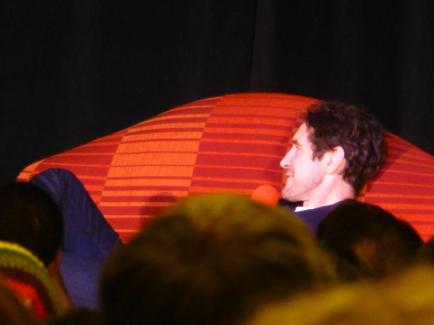 Sidebar: Is that Bald Spot I see again in photo #2? Who did he screw to get an assigned seat?

Paul is just as chill professionally, since he didn’t even need to see a script before signing on do the webisode. Good thing, because Steven Moffat hadn’t written one yet. Paul told us that Moff was waiting until he got his actor on board before he penned the Eight to War Doctor regeneration story. No time for Moff to waste. He’s a busy man, what with all the character assassination he had to work into Sherlock series 3 and the Who Christmas special this year.

Let’s not mock Moffat too much today, especially because he and RTD were always allies of Big Finish and the audio dramas where Eight embarked on most of his adventures. There’s even a shoutout to his audio companions in NoTD. Cass, very un-companion of that story, was also with us at Gally 1. Emma Campbell-Jones joined the panel halfway through and got to be on the receiving end of Paul’s aggressive informality. In other words, his head was almost in her lap.

See the rest at Head Over Feels…