He came to Pawnee as a cute fascist hardass, but never let it be said that Ben Wyatt doesn’t absolutely LOVE stuff. He’s put together a website that lets you apply for your utility tax refund online. That’s the dream. Unfortunately, Ben lives in a town where practicality isn’t greeted with nearly as much excitement as an animated panda who plays ping pong with his tail. Times like these, he could really use Chris Traeger.

Meanwhile, the woman he’s chosen to love is crafting binders full of questions about her big job offer, and Grant Larson isn’t even phased by it. He actually seems impressed. This guy—he’s Leslie’s people. But she can’t make any career decisions until she feels like Pawnee is in a good place, and that starts with a new slogan. With the influx of Eagletonians, this town isn’t fourth in obesity anymore (we’re not coming for you, San Antonio). Is it still first in friendship? Ben’s set up a poll on the website, and Leslie hits the press junkets to advocate for her favorite option: Storied Past, Bright Future. “Storied” is one way to describe bread factory fires and gazebo massacres and sentencing women to death by iceberg, sure.

Crazy Ira and the Douche, per usual, are Leslie’s biggest test. They flood the system with write-in votes, and the more Leslie tries to fight back, the more it looks like the next town slogan will be “Pawnee: Home of the Stick up Leslie’s Butt.”

The uproar only gets worse when Leslie sends passionate emails to the offending voters, urging them to do the right thing. Violating the right to privacy kind of undercuts that message. Leslie determines to fix it all at a Town Hall meeting, presumably by standing next to the pawn shop’s jewelry and nails guy until ‘illegal’ starts to seem like a relative concept.

Leslie loves trying just a little more than she should. She can’t just campaign for the most votes—she has to campaign for every vote. That’s how Ben ended up punching a guy in the face in a bowling alley. Leslie works the individual angle. She’s not the kind of person to see the forest for the trees, and here’s Grant Larson to tell her that she won’t be planting trees anymore. It’s a lot to take in. This Town Hall meeting could be the perfect chance for Leslie to try big-picture delegation, even if it means trusting Larry to run the show. If she can succeed with a man who takes his belt off every time he sits down, she can do anything.

And while Larry’s success mostly consists of doing nothing until exactly the right moment, that’s probably a good lesson for Leslie too. He lets Douche Nation & Friends dominate the early part of the meeting until eventually a smarter voice speaks up. Who is this woman? She’s like Lindsay Carlisle Shay before her defection to Eagleton. She might not be the best at grammar (“No no no, she made it possessive. She’s getting further away”), but let’s hope there are more people in town like her. The crazies can’t be the majority, can they?

Having passed her test, Leslie finally admits to Ben that she’s not just afraid of delegating. She’s afraid that she won’t be any good at the job. Pawnee is safe for her. I’m so glad to see the show acknowledge that, as great as it is for Leslie to love hard work, she doesn’t have to hold herself back in order to be that person. Also, Ben’s right: this is the stupidest thing she’s ever thought. Leslie can’t fail any more than Ron Swanson can quit being Duke Silver. Everyone in this department has mad talent. It’s time they own it.

Will Andy convince Ron to play the Unity Concert? I hope so. Ron is so far past hiding his passion from these people. Andy’s adorable, sincere “Don’t quit music. Please” is so full of all of his own MouseRat goals.

Tom is finally making progress on his bistro, and thankfully/ unfortunately, he won’t even have to work a load-bearing T-Rex into the decor (hey Jurassic Fork!). April and Donna don’t want to lose the little guy, but you know they’ll be his first regulars. He’ll even set aside a table for them.

“This is the last listing I have that isn’t an active crime scene.”

“Pawnee: home of Crackers, the orangest goldfish in Indiana”

“You’re really good. You’re like the saxophone player for the California Raisins good.”

The “Also I had a banana on the way over here” dumpster bit is officially one of my new favorite things to ever happen on this show.

“We should split a turkey sometime.”

“I once forgot to brush my teeth for five weeks. I didn’t actually sell my last car; I just forgot where I parked it. I don’t know who Al Gore is, and at this point I’m too afraid to ask. When they say 2% milk, I don’t know what the other 98% is. When I was a baby, my head was so big scientists did experiments on me. I once threw beer at a swan, and then it attacked my niece Rebecca.”

“Leslie, I told you, I’m not gonna participate in your weird Julia Roberts cameraman husband fantasy.”

“I’m starting to get kinda turned on imagining you as a dictator, is that bad?” “No, it’s ok.” 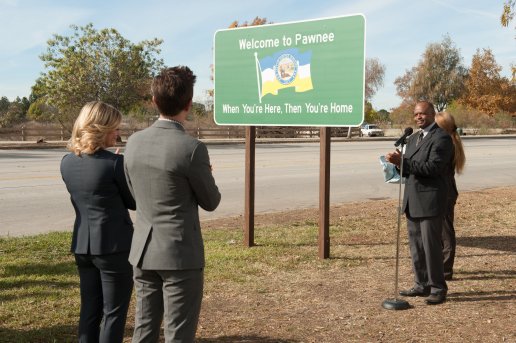 First in friendship, first at making tourists drive around in circles.