Did you remember that Joel McHale played a polygamist dog breeder in an episode of Pushing Daisies? Because I did NOT. This is exactly why I was due for a rewatch of this magical little show. As always, check out my full recaps over at the EW Community, along with some spare thoughts below.

Even if his dad hadn’t ruined the holiday in the worst possible way, I feel like Ned still wouldn’t like Halloween. His gift is really special, ok? Don’t cheapen it with your zombie masks.

There is a lot of collar action in this episode and I am not mad at it.

“In other news, kittens on parade!”

“Think of it as an escrow between my thighs.”

Chuck’s aunts put her in orthodontic headgear for years as a form of birth control. Do we need to talk about what else her aunts might have done to her? Should we be worried?

Chuck and Digby as alive-again buddy cops is a show I would watch.

“So he lay down where his bed used to be.”

Why does Olive always have to take all of the slack?

I’m dying at Emerson’s reaction when he hears where All the Gold is buried. 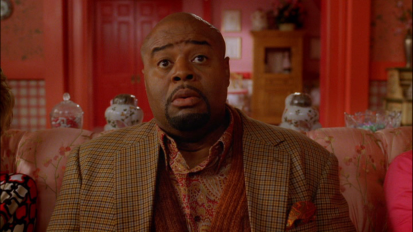 Vivian and Lily have taken in Beaver Boy from next door like they’re his family, and it’s great. They all have something in common: wanting Chuck. It’s also more than a little duplicitous on Ned’s end, not to mention unfair. He’s the one telling Chuck that she can’t see her aunts, and now he’s settled in on their couch. But it is adorable how touched he is by Chuck’s pie delivery scheme, and I love how much Vivian wants him to know that he’s better than his father ever was.

“As the Pie Maker started off, he realized that for the first time in his life, he missed something more than his past. He missed his present.”

“Those doctors were artists. It only took two years until I could walk up the basement stairs on my own, and only another three until my mamma let me.”

John Joseph Jacobs is like a sweet gangly adolescent flamingo. I love how Olive wants to give him the world. She won’t let him be ashamed of his appearance.

“Swizzle sticks, we’re out of crackers.”

Olive is willing to sacrifice herself to stop the killing. Olive Snook deserves all of the best things in this world.

If Lee Pace gallantly swept me away from certain death, I’d get caught up in the moment too.

I JUST FEEL LIKE CHUCK JUST SHOWING UP AT HER AUNTS’ HOUSE AT 2 AM IN A GHOST SHEET IS A LITTLE RISKY AND PROBABLY ILL ADVISED.

When Jim Dale says, “But when his mother died, twice,” he slips “twice” in there so quickly and just a notch quieter, like the narrator doesn’t want to say it because he knows he’s going to have to answer questions.

“Still, he wore hope on his head.”

Look how TENDERLY he runs his hand through her hair.

Last week, Olive was secretly a little delighted by anything that might cause a rift between Chuck and the Pie Maker. Then she and Chuck solved a crime together and made their peace, and now Olive comes right out and tells Chuck about the kiss because she doesn’t want anything to come between THEM. Olive is great, as is this friendship. I love that Chuck stands up for herself without blaming Olive. She understands that Ned deserves an innocent expression of gratitude now and then, but she wouldn’t like it to happen again. This is how all conversations should go.

Olive is really excited to hear Chuck say out loud that she and Ned don’t touch. She’s been waiting to talk about this forever. The allergy explanation is a little weak, but I’ll allow it.

“Which is why you kiss through the plastic food wrap! I couldn’t get my head around it.”

“It’s really not that bad” “And it wasn’t. Yet.” Getting reallll tired of your omniscient teasers, narrator.

“With an intense charismatic flavor that could only be cyanide”

The most realistic story this show ever told was the story of multiple women wanting to marry Joel McHale.

“Pickle loves him some D&G.”

“We’re intimate, but it’s the appropriate human-canine sort of intimacy.”

“I was in shock after I lost my Pie. The horse, not the food. Then one day I was walking along and I saw a bakery in the shape of a giant pie–the food, not the horse. It was a sign! I don’t know what it said, but it was there.”

Simone and Emerson have definite chemistry, but he deserves more than a snap of the fingers, I think.

Olive responds to Ned’s apology with “I’m a big girl.” He doesn’t get to control her emotions. I think she’s telling that to herself as much as she’s telling him, but it’s important nonetheless. Olive wants Ned to be happy. But if that can’t happen with Chuck, she hopes he figures it out sooner rather than later. I’m swimming a little closer to the Ned-Olive ship every week, you guys. She’s doing everything right. She’s possibly the best person on this show. She deserves so much.

And the touching thing really is a challenge for Ned and Chuck, not to mention the vaguely unhealthy aspects of their relationship (he gets so possessive of her and keeps her from her aunts; she pushes him and has a hard time understanding how messed up his life has been since they were kids). But it all gets  so complicated when you factor in the fact that Ned, at least right now, doesn’t feel that way for Olive, and he does for Chuck. She’s the only one who makes him smile. We’ve established that Ned’s smile is 95% of why they work. She pulls him into the sun. He says the most perfect things to her.

“Everyone wants stuff. We wake up every day with a list of wishes a mile long and maybe we spend our lives trying to make those wishes come true, but just because we want them doesn’t mean we need them to be happy.”

“What do you need to be happy?”

Where are you falling in their relationship dynamics right now? What do these people need?