I’ve never been so conflicted.

Times Mulder and Scully should have made out in I Want to Believe:

You have to hand it to this movie for wasting absolutely no time reminding us to trust no one. “This is West Virginia,” it says. “No,” I say, the daughter of a West Virginian, but even if I weren’t, I’d know.

They live in the middle of nowhere and they know that this gate is both too much and not enough for whatever’s out there. But she still opens and closes it every day, rain or shine.

“If I had to settle down, build a home, it’d be a place like this.”

It’s like if Mulder’s apartment moved to the country and developed Scully’s taste in art. They built a home together. They went looking for homes together. I think they saw something of themselves in this place: There’s no way for anyone who isn’t in it to understand its magic. And after so many years of being pressed on every side—by the Syndicate and the Bureau, by “the darkness” and near-death experiences—those forces let go, and Scully and Mulder still hold themselves together. The pull between them was always stronger than the pressure on them. They’ve become, and to some extent always were, this island of a house, still standing even though it has nothing to lean on but itself.

Nobody down here but Dana Scully’s most wanted.

Mulder, are you coming on to me?

IT JUST NEEDS A TRIM

“Shit,” I almost forgot how much I care. What a drag.

Of course she gets shotgun

Mulder doesn’t zip his coat once in this entire movie

“This isn’t my life anymore, Mulder.”

Look at him! He’s already Mulder again; look at his eyes. He has someone to help. But what excites him even more is the idea of helping someone with Scully again: the idea of needing her not to get the get the groceries or hold a bank account but to save a life together, like old times. 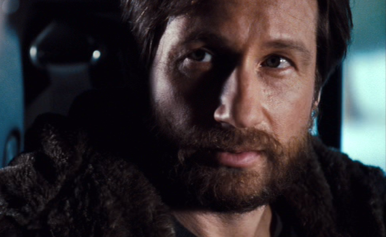 The other half is so pretty. Have you seen how pretty she is? Every time she talks about science I propose to her. She shot me once.

*Yes yes yes here we go, Mulder has got the flow*

“Why haven’t you told me about this before?”

Remember when Scully and Mulder were casually affectionate in the home they shared and this was just life?

He’s going in for more. He is Going In for More

Anyway I love The X-Files: I Want to Believe (2008) and Scully should laugh all the time

Skeptical Partner Wants Both Sex and Reasonable Discourse: A Painting

I wouldn’t even make direct eye contact with her, personally.

I like this because Scully isn’t jealous; she’s just appalled

But he can never stop trying to make it so no one else has to hear that.

Also this movie’s opinion on Amanda Peet and Gillian Anderson

Mulder is less desperate this time than he was 10 years ago. He’s more sure of himself: He needs her on this WITH HIM. This isn’t about her utility to his mission. This is about THEM, together.

I am forever grateful for this line though.

“But I can tell you that I won’t be coming home.”

IF YOU WATCHED THIS SHOW YOU’D UNDERSTAND. IF SHE KILLED YOU NO ONE WOULD EVER FIND THE BODY

she’s thinking about it

Scully is having a very bad day

…who call him Fox

That’s all she’s ever wanted for him

“It’s like you said: That’s why we can’t be together.”

Apparently the urn holds the ashes of his dog, who died during filming. He looks so SAD. Everything is sad.

Also I can’t call Monica Bannan by her name, Mulder. It makes me miss Monica Reyes too much

Let her run the Bureau already

Pretending that he has any confidence in Mulder’s judgment: It’s like riding a bike.

Scratchy beard is the scene I’d save from a fire, but this is my actual favorite moment of the movie.

People are dying but Mulder needs a coat

This is exactly what she did when Mulder was hypothermic in a tub.

Her little “kiss me” pout though

You either get good lighting or a good angle: You have to pick one (1) 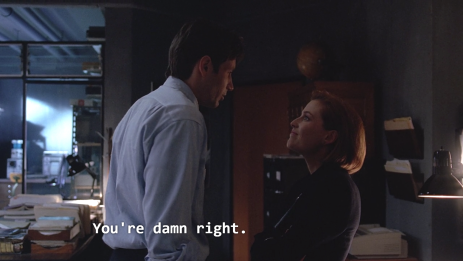 It’s okay, Mulder. She’ll be back tonight to help you look for the Speedo.

Anyway, they’ll figure it out in season 10. Which is this month, because it’s been half a year since my last post, and I’m garbage. I’m back now! I’ll be here to talk out every new episode, for better or for worse. Mainly better. I can’t wait. Think of this post as a cleansing of old wounds. Now the healing can begin.